As some of you know, I am the official North American Loo Watch reporter for Sue Main over in Wales. I take this responsibility seriously - the world needs to know about this stuff.

This past weekend Louanne, Jenny and I drove down to Gig Harbour to the farm of Sue and George MacDonald for their Ewesful Acres trial. This was my first Open trial - but more about that later - on to their beautiful Loo.

We`re used to the pretty common plastic porta potties at our trials, but Sue and George have a porta potty that also rates as a historic building. 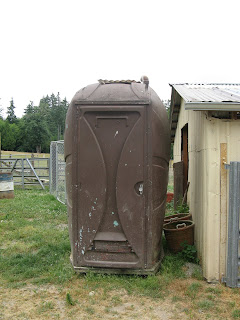 This Porta Potti is a military Sani-Cam built in 1942. While it looks like it has been sitting in the sun too long and is set to explode, it's shaped all wide at the top so that soldiers could use it with their packs on. 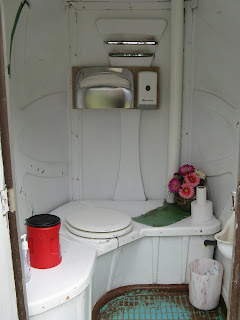 Once again, a woman's touch is obvious. Flowers, hand sanitizer, a garbage can, seat covers - it may actually be bigger and with more amenities than my bathroom at home - well done!

As for the trial? My goal was to go down and not embarrass my self completely. I wasn't planning to enter Open at all this year, but a little peer pressure from my friends and the opportunity for a "girls weekend" was a enough to convince me. The field, while not large was tricky with lots of dips and bumps. 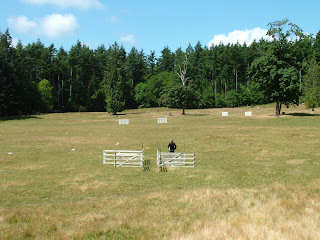 That would be me, shaking in my boots at the post.

Not only was the field itself tricky, there were added elements which I hadn't even thought about preparing (or obsessing about - ignorance really is bliss) for, such as a Maltese cross, blind cross drive and a single.

The great news is, we did manage to get around the course both days finishing in the top half on Saturday and close to it on Sunday in a field of 60. I am most proud of Hope on Sunday who, having never trained for a single did a great job of taking my poor set up, turning on to the ewe and really showing that he could hold her.

Today we're back at Louanne's unpacking the truck and then packing the trailer so we can head off to today for Ian and Joanne Zoerb's trial tomorrow and Thursday, Wendy and Chris Schmaltz's trial Friday and Saturday and then the Calgary Stampede Sunday and Monday. I'll try to keep you posted.