Some times things don't go as planned and then you have to make the best of it. 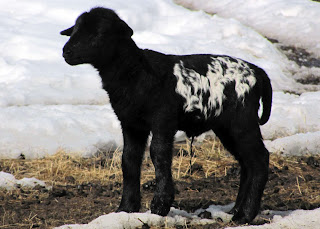 Meet Annie. Things worked out better for her than for her mom...enough said. 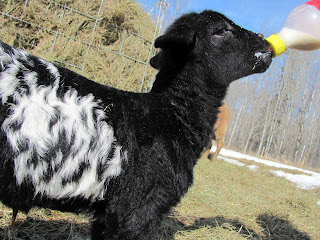 She spent a couple of days drinking... 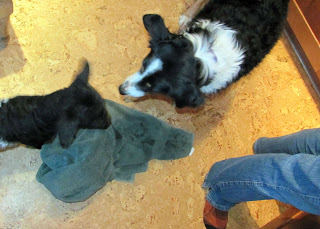 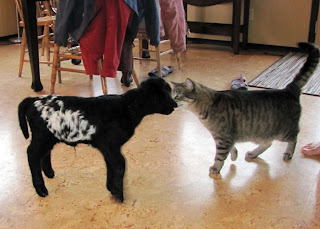 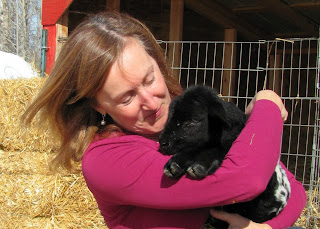 Then she met Sheila and decided to settle down. Now based on recent reports, she prefers to stay home and enjoys watching American Idol.
Looks like all's well that ends well.
Posted by Lisa at 7:36 PM 2 comments:

Apparently it is International Puppy Day...who makes these things up? Those of you who are my facebook friends will recognize this picture, but I think it really shows what I like in a pup... 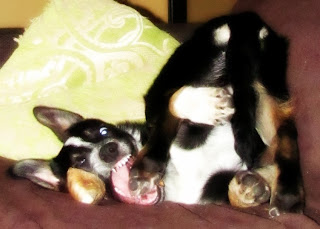 Everyone else is putting up sickly sweet, adorable pictures of the pups they love. I prefer to show my pup's true depraved side. He keeps things interesting around here... 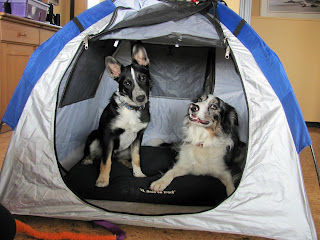 Ben is TWO! His birthday was actually on St. Patrick's day (which is why I actually remember it), but I was in the city picking up dog food on Saturday - so I'm getting around to blogging about it now. I asked Ben if he minded and he said he was just fine with me picking up grub for him and blogging about his birthday late. At least I imagine that's what he WOULD say...if he could talk.


Lately it's been Flinty this, Flinty that but not today. Today I present you with actual video of Ben on sheep. Yes,  the dogs do occasionally get worked around here.

Last fall Ben seemed to be struggling confidence issues. He just wasn't covering well, and  had a tendency to let sheep go rather than trying to stop them. He and I have been messing around with things this winter and I think it is starting to pay off. I'm really pleased with how far he's come and am looking forward to a. getting back out into the fields with him and b. trialling him this summer.

Today Travis and I spent the afternoon putting a gate in from the back yard to the lambing pen so I wouldn't have to walk the long way around in the dark. When I say "Travis and I", of course I mean Travis put the gate in....and I held on to stuff.


As soon as we finished up and moved on to other projects, look who checked out our work? 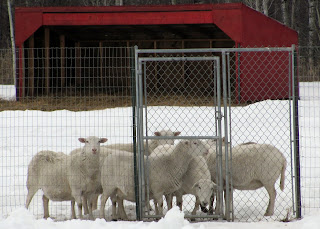 The pack of "first timers", who apparently would rather check out our fencing techniques than hang out by the bales, chew cud, gossip and sun bathe. What do you think? Will it swing? How's the latch? 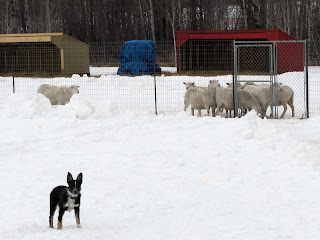 Thought I'd throw in a shot of Flint showing his desperate interest in live stock. Yep, he's a keener!
After we finished with the gate and a few other projects we moved on to setting up the "lambing barn", which in our case happens to be the red calf shelter...Now, given that I bought a 5 gallon pail of red barn paint last summer, let me assure you that the other shelter will also be sporting a shiny red coat as soon as things warm up enough and the ewes and lambs move out.
As soon as we finished that project up...which took a whole EXHAUSTING 10 minutes, we went in to the house to put on our PJ's and toast our all our hard work with a frosty beverage.
As soon as we moved out, look who moved in... 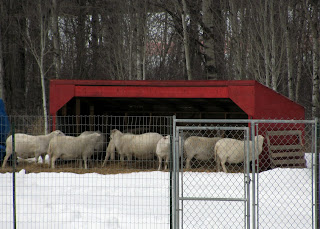 Hope you approve!
Posted by Lisa at 4:20 PM No comments:

It has been a very dry winter, but months of  "I can't believe the winter we're having" have added up...and now we're getting some snow. As in, we've had as much snow in this past month as we've had all winter. Has that slowed Flint down? Not at all! He has EMBRACED the fresh snow (let's all pray that it will melt soon) . I'm sure his newly shown brilliance will transfer to stock...

To be clear, the snowballs Flint is chasing are of his own making, as are the voices in his head. Bless his heart.
Posted by Lisa at 9:03 PM 4 comments: 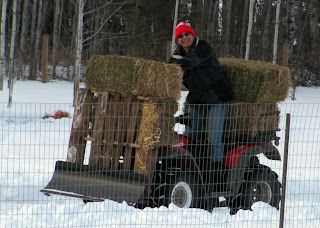