I think we need a bigger couch.

It's Saturday morning. We're all on the couch drinking coffee and catching up on our email/newspapers.

It's a small couch, and two average size humans take up a fair chunk of it's space.


That doesn't stop anyone else in the family from joining the two humans. Their idea of "there's lots of space left" is a little different than mine I think. 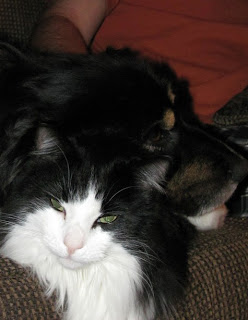 Bruce finds that Antonio makes a fine couch cushion, and Antonio suffers through Bruce's company because he's a good heat source.
Posted by Lisa at 6:31 AM