He may not be growing up, but he sure is growing!  Sam's about 5 months old now.  He's big enough now that I don't have to lean over to pet him, but still so much a pup. 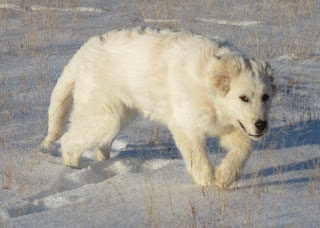 Sam Sheepdog - the king of "squishy and sweet".
Because of the weather (for the next 4 months or so) the sheep are less active right now. Odd thing about sheep, when you put a ton of feed in front of them, they stop grazing and just stand around and eat, except for when they're lying around chewing their cud or sleeping - kind of like humans at a Christmas party.

However with Sam's age he's getting more active (and has occasionally played with the sheep - no damage yet, and I'd like to keep it that way) so I've been taking him for a couple of walks a day out in the field.  When I'm not out with him, he wears a "dangle" which so far has worked like a charm.


I thought the walks would be a bit of a chore, but so far I'm really enjoying them. There's nothing like a happy puppy to make your day just a little bit better. 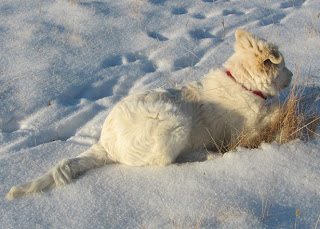 Ready for take off.
Sam's favourite stop on our walks is his Jungle Gym...or as it's more commonly known...The Manure Pile.
It's his most favourite place. Really. 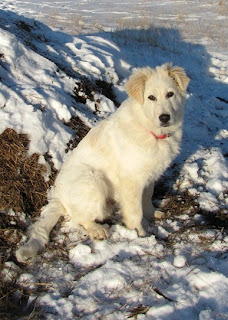 At the base of Mt. Poopsicle. 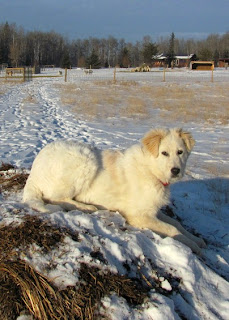 and at the top.
but in case you think I'm telling fibs about a manure pile being his favourite place to hang... 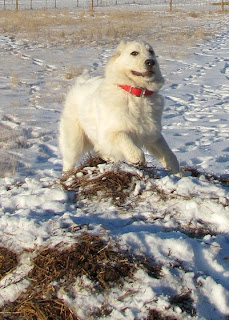 here he is between top and bottom - pure Maremma joy!
When we're back from our walk? It's business as usual. 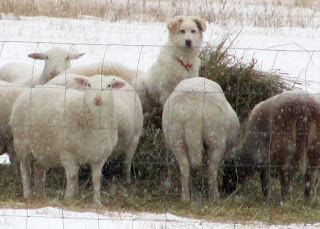 I really love your blog Lisa!
I have some dogs that originate from Karen so I found Your blog from her blog!

Oh my goodness..what memories the cartoon brings back (gosh i sound old)..gotta love that they are buds right up until they clock in!


Good boy handsome sam you are really growing up!