Our trip - the readers digest version.

Cleverly, by putting off the "trip" blog long enough, Louanne, Wendy and others have done great jobs of describing the trial fields, sheep, food, camping, etc.. Which means that by now you've probably read all about it and I can just hit the highlights according to Moi.


EID was its usual well run self. Ian and Joanne Zoerb always do a great  job with this trial. Between the horses at set out, and the tricky terrain Hope managed two poor outruns. The second of which being my fault. He stopped short and in my infinite wisdom I blew a flank...as I was whistling it, I thought to myself "that was probably a poor decision I should probably have blown a walk up and he'd have corrected it himself", or more truthfully "oh sh*t" because he took that flank - kicking way out to kingdom come. Eventually we found each other and the rest of the run went well. Actually better than well. Panels have been my nemesis this year. I swear there are trolls out on the field who strategically move the panels as Hope approaches, leading to "panel panic" on my part. Good news - we're back to hitting our panels and it feels GOOD.
As for Kate, the first day when I sent her I thought she was down in a dip (the outrun had some decent blind spots), when really she had headed to exhaust. Incredibly I managed to get her back on course and out to her sheep - not something she's ever been asked to do before. While the run was a write off I was really pleased with her.  The second day she had the unfortunate luck to draw a group of sheep who bolted back from the set out to the exhaust before she got out to them. Once again I was impressed when she managed to catch her sheep, get hold of them (no small feat as they were very keen to stay put), and bring them back on line through the fetch panels. Another great training run.

The handler's supper - made by Jerry - was fantastic as always. Travis survived the trial and only mentioned once that "the first coat's dry and it's time to put on the second coat" after a full day of watching black and white animals push black and white animals around a field. He seemed to have good stamina and a keen eye for things - I had a good start on him.  Bruce amused himself by swimming in the reservoir and filling his coat with spear grass.


Shaunovan, hosted by Jamie Van Rhyn (Great job Jamie - we'll be coming back next year) was on the kind of field you'd expect in that part of the prairies - flat. Hope and I continued to get our act together. Day one he did a great job of getting hold of sheep that desperately wanted to head to the exhaust but fought with me at the drive away panels when I asked him to give up the pressure to make the turn. He crossed his course and things didn't get any prettier on the cross drive so I retired. The second day we put together a really nice run on equally difficult sheep until the pen where Hope decided he'd had enough, took a cheap shot and gripped off. It's been a while since he's done something like that and I was not terribly impressed with him.


Kate had some difficulty with the horses at set out, stopping short and needing a number of redirects to get her to the top. She did a good job of getting her sheep back on line for the fetch both days given that there was a hard draw with many dogs had difficulty with. However this caused another problem in that she then didn't want to give up the pressure when needed. We wound up retiring on our first go around when she also chose to cross her course at the first set of drive panels and our second go around went...slowly as I fought with her on both the drive and fetch - no drive points as we timed out - but still a score of 45 for the OLF so it really wasn't all that bad.


Travis amused himself by going to the big city - Shaunovan - for supplies and caught up on his reading. The weather was decent, the pace not too difficult, and I felt that his training as "trial husband" was progressing nicely.  Bruce kept busy by encouraging any and all Border Collies to run great distances across the prairies whenever they were let off their chains.

Maple Creek and the Western Canadian Finals...I was expecting more of the same after Shaunovan - flat and expansive. What we found was a tricky course that frankly scared the bejeezus out of me when we arrived. That, coupled with +36 weather, a blowing wind filled with dirt, and a tiny flattish space for all of us to camp on  and I thought to myself that maybe I had bitten off more than I could chew - what with it being Travis's first trial experience and all. However, eventually you have to see whether they can handle the pressure...or not.

Hope continued to run well and had no difficulty with the terrain. We happily hit our panels more often than not.  Unfortunately on our first run after holding the single for what seemed an eternity waiting for the judge to call it, once again Hope decided he'd had enough and we gripped off.  Hmmm, something to work on.  Day two we had a good run, but between sheep that just didn't want to split and me safetying up so that Hope wasn't given the opportunity to practice bad habits, there was to be no shed for us.

Kate had difficulty with pretty much everything on the first day and by the end of the run I was pretty frustrated with her. Frankly I found day one frustrating in general and was not my usual Polly Anna self.  Day two however, was a totally different story. Kate had figured out that horses were not there to eat her, listened well all around the course and we penned our sheep with no trouble. We finished with an 81 - the best nursery run of the trial - with only 2 points off our drive and a perfect outrun and lift. Needless to say I was back to my usual cheery self. With that run Kate moved up dramatically and finished third overall. Good girl Katie!


By Sunday the weather had very much turned and those of us that remained wound up being towed out by tractor...so of course I finally had reason to start taking pictures! 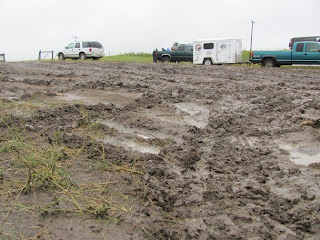 Maple Creek mud - twice a greasy as it looks. 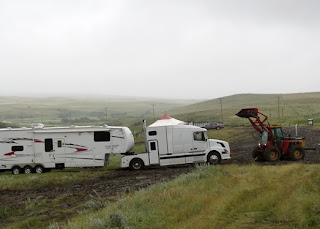 Travis entertained himself by keeping the furnace going, making hot drinks, and watching little tractors pull big rigs out on to the highway. 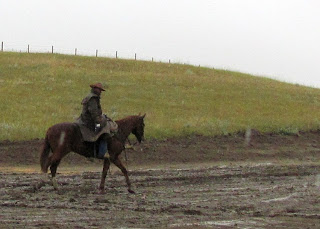 Travelling by horse was by far the best and only way to get around in the muck.
A few of us stayed over on Sunday night in the hopes that the rain would stop and the parking lot would dry out. No such luck and on Monday morning we pulled out, or more correctly, were pulled out. 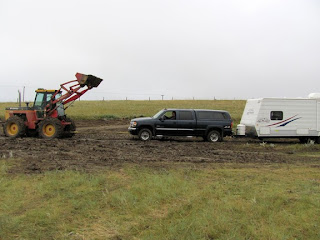 Our truck and trailer are now well and truly broken in. 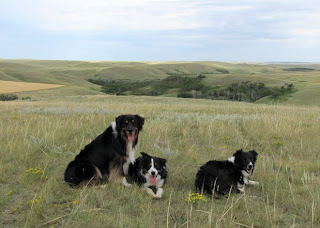 All in all, a great trip - great company, great dogs, great competition, great scenery and bit of adventure - exactly why I like trialling so much. 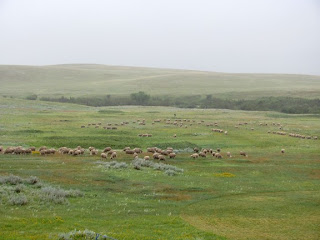 I'll give Travis the winter off to think about things, and with any luck he'll be keen come spring to get out to the trials again!