Tell and I went out to sheep and moved their nets around this afternoon. We spent a couple of hours out there in the rain, moving the nets, cutting down little trees in the way, shifting the sheep around. By the end of it we were both soaked. So, off he went to his cozy dog house, and off I went to my cozy human house. I was all set for a cup of tea, and a little internet surfing.
Odd thing was, there was no internet. We've got wireless high speed so I blamed the dish, the weather, the router, the provider.
I phoned Travis who suggested that I do "something else" for a change. I had just spent the afternoon doing "something else"! Probably the first stages of withdrawal were showing...
So, when he got home he checked things out and then called MCSnet when he couldn't get things working. Among other things they suggested that there might be a problem with the line going into the house. I took a peak outside...

The line was definitely at fault and I have pretty good idea whodunit. 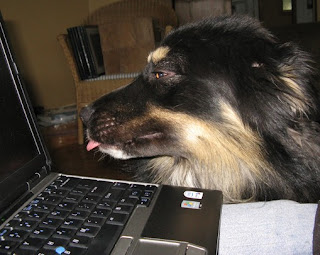 Nope. not guilty at all.
MCSNet said they'd be out maybe tomorrow, maybe Monday. Apparently the look on my face was too much for Travis. He said he'd see what he could do. 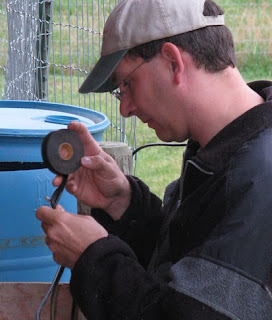 You're reading this, so you know he managed to patch things up. Handsome AND handy!
Posted by Lisa at 6:27 PM