Hope and I got back from what is now definitely an annual tradition - the World Stockdog Competition at Calgary Stampede. As usual it was Louanne, Jenny and I travelling together and staying in  Louanne's hacienda. As usual we went to the Schmaltz's Hilltop Trial first. As usual the biggest winner bought supper on the way to Calgary. This year we had to pick low hanging fruit when choosing the winner. Louanne was the only handler in the truck to get a score all weekend, so the Big Mac's were on her.  To put in perspective though, basically anyone that got a score wound up in the top half of a field of over 50.  Hope and I considered the trial yet another "learning experience".  Oh well, I was in good company.
Wendy managed to catch some shots of me at the post on the second day in what seems to be a classic pose for me - hand in the pocket. 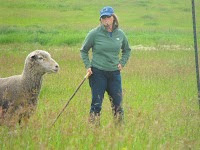 Note to self - must sew pockets shut before next trial.
This year I convinced my friend Lara Forchuk to come out for Stampede AND to run a dog instead of just watching. She'd be thanking me for that later...
Day one Hope and I were third in the handler's circle.  We laid down a GREAT run and I got to slam the gate for the first time at the Calgary Stampede! 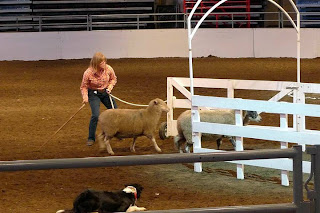 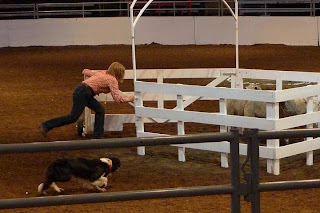 Given that we were third up this put us in 1st.  Slamming the gate and being in 1st at the stampede (no matter how early in the day) is one HUGE RUSH.  Hope and I hung on to first for 26  (of 60) more runs and finished out the day in 5th position and in the money.  Too much fun!!
Day two we got a particularly bad draw of sheep with one ewe who REALLY didn't want to play the game. Hope did a terrific job of finessing her around the course but it just wasn't nearly fast enough and we timed out at the chute. No finals for us this year.
However, Louanne and Lara DID make it to the finals! 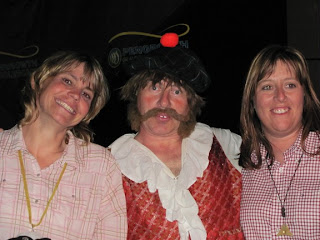 Lara and Louanne hanging with their good friend Angus McAngus before the finals.
Congratulations to Dave Claypool and his dog Glen for their winning run, and to Wendy Schmaltz and her dog Gin for their reserve win.
Can't wait til next year!
Posted by Lisa at 7:37 AM